Next up is the first 100-pointer in Microcorruption:  Algiers.  This level corresponds to a new class of bug.  Previously, we were using printf format attacks, now, we’ll be using use-after-free (UAF) attacks.

Let’s get started by talking about changes to the software at this level, and how I knew what approach to take (sorta 😉).

Updates to the LockIt Pro

When we start the level, we’re presented with release notes.  It talks about how the LockIt Pro Account Manager is able to handle multiple users via the use of PINs assigned to each user.

That didn’t seem to be that relevant to the solution though, so let’s keep looking.

The first thing I noticed while scrolling through the code was Heap exausted [sic]; aborting. in the strings section.

I also noticed we’ve got malloc and free.  We’ve also got an unconditional unlock_door function:

The address of this function is 0x4564.  We’ll probably use that later.

Lastly, the main logic of the program (in the login function) looks like this:

You may remember malloc as the mysterious creature from your college “Intro to C” class.  Malloc (memory allocation) is a way of specifying memory dynamically.

Wikipedia talks about how memory can be allocated in C:  statically, automatically, or dynamically.

…Dynamic memory allocation [is a method in which] memory is more explicitly (but more flexibly) managed, typically, by allocating it from the free store (informally called the “heap”), an area of memory structured for this purpose. In C, the library function malloc is used to allocate a block of memory on the heap. The program accesses this block of memory via a pointer that malloc returns. When the memory is no longer needed, the pointer is passed to free which deallocates the memory so that it can be used for other purposes.

If we search for a man page, we can see that the function signatures match what we’ve just described:

C still uses malloc (as opposed to C++ which uses new and free), so unlike gets, it might not be inherently insecure.  We might be able to find an implementation mistake, however.

At this point I noticed some weird things, namely:

A quick search through the manual shows nothing for “malloc” or “free” or “heap” so let’s assume there’s nothing particularly unique about this implementation (or at least, the manual hasn’t given us any clues).

Since we’re allocating less memory space than what we are getting via gets, it seems like there’s possibility for an overflow.  I searched for “malloc overflow” and found this:

The malloc() overflow 11 exploits the heap memory objects allocated via the memory allocator in the GNU C library. The memory allocated by malloc() not only includes the user requested block but also the data used to manage the heap (size of the block, pointer to other blocks and the like). The vulnerability is that a heap variable can be overflowed to overwrite those management data. Exploits based on this technique can bypass stack-based defensive techniques such as StackGuard, StackShield, Libsafe and Solar Designer’s stack patch.

The “pointer to other blocks” has me curious.  I found this presentation, which (among other things) asks the audience to guess how many bytes are allocated for each malloc call (with inputs of 0,

A few slides later, we see that each chunk of memory returned by malloc contains some metadata (in addition to the intended data), namely the size of the previous chunk and the overall size of the current chunk. 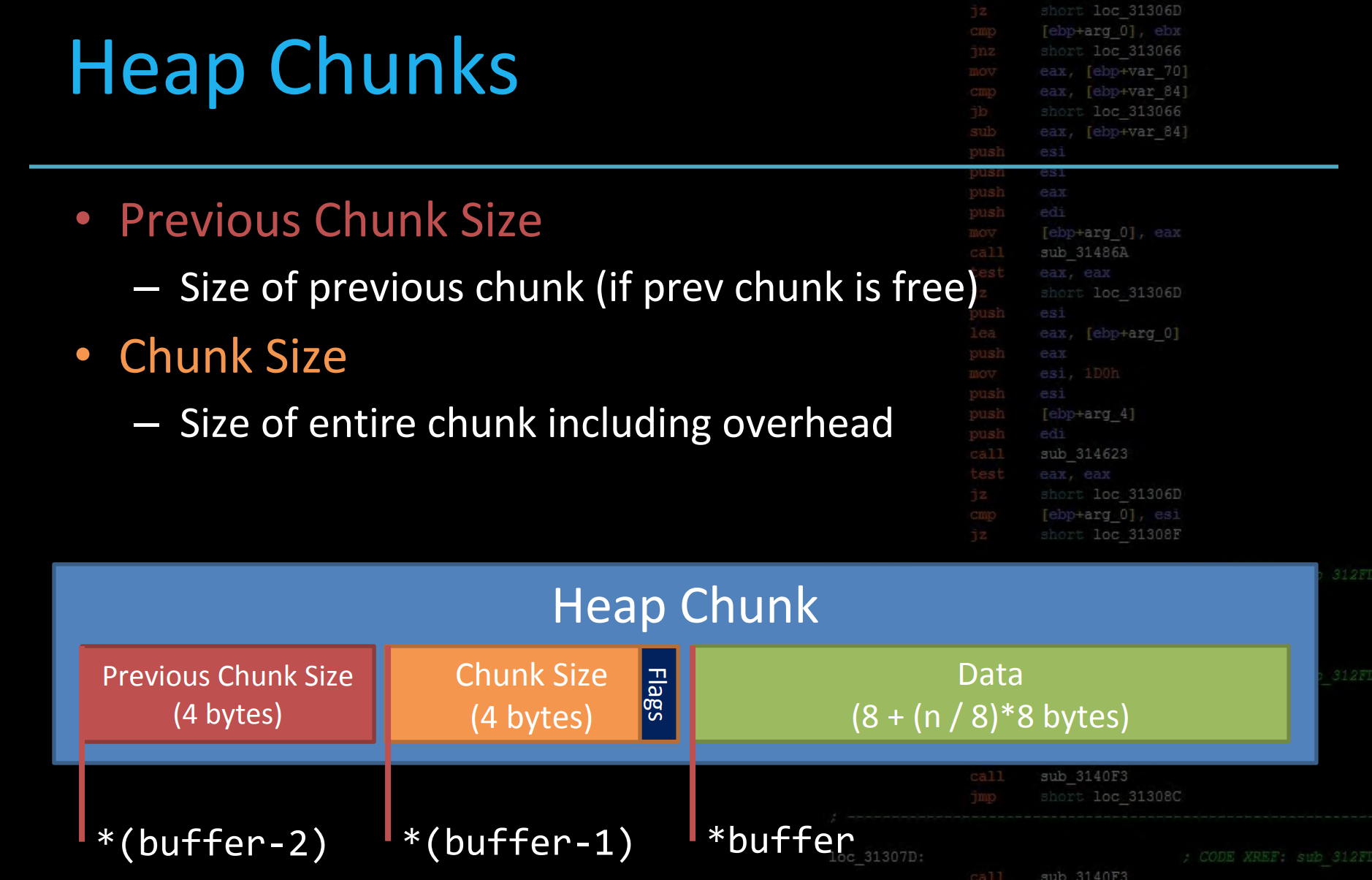 When I started writing this blog post (which is to say, when I was taking notes on this level as I was trying to learn/solve it), I had a section called “learning malloc by staring at bits”.  I set breakpoints at 0x463e, 0x4648, and 0x4650, which is before the first malloc, after the first malloc, and after the second malloc.

This is with empty username and password inputs (after both mallocs occur):

You can see some repeated 0824s, as well as other numbers that (also) look like addresses when adjusted for endianness:  241e, 2434, etc.

Since I know that gets allows us to input more characters than we have room for in our malloc’d location, I entered in AAAABBBBCCCCDDDDDEEEE.  It overwrote some of the 0824 blocks that were shown above:

Let’s take a super quick detour to the end of login where we’ve got a return call that we could (maybe?) reroute.

If we set a breakpoint there, we see that the return value of 0x4440 (which sends us to ‘stop program execution’) is stored at address 0x439a.  Unfortunately, it’s out of reach of our gets input (0x30 for username and 0x30 for password).

So, where does that leave us?

The presentation I linked to earlier discusses malloc overflows, but within the context of having a function pointer to overwrite.  It would appear that our code is less interesting than that, so let’s keep going in the list and see what other ideas might apply.

Again, from the presentation, Use After Free (UAF) is:

A class of vulnerability where data on the heap is freed, but a leftover reference or ‘dangling pointer’ is used by the code as if the data were still valid

To briefly recap, our program malloc'd 0x10 bytes worth of space for the username and password (each), then gets'd up to 0x30 bytes (each).  That means that we could overflow the username-allocated chunk and overwrite information in the metadata of the password-allocated memory chunk.  Then when we free both chunks, and somehow use the free'd data and maybe execute some bad code?

My notes at this point after many, many strings of different hex-encoded values.  A lot of this was iterative learning-by-doing.  I knew that I needed to overflow the username portion, and that overflow’d part had the ability to overwrite other parts of the data.  But why did that work?

If I swap out my 45s with 46s (Fs), then let the program run, I see that two lines of instructions in the 0x4646 block of memory are overwritten:

Again, why does this happen?

Something Amiss in the Free Call

We know that this change happens after the calls to free, so let’s set a breakpoint on line 0x4508.  We also know that the affected (overwritten) instructions correspond to the overflowed input that we’re providing for the username.  Lastly, we know that that area of code used to have 0x2434 in that location, which seems to be a pointer to the end of the second malloc'd block of code.

Again, with an input of AAAABBBBCCCCDDDDFFFF for the username (and whatever/nothing for the password), I wrote up these comments on each instruction of free:

Some takeaways from that:  we can now see how the overwritten messages are getting into the 0x4646 block, because we’re clobbering 3 different addresses.  I tried using this to overwrite some instructions at the end of login by following that address value with the new value I was trying to write.  But, I would always end up shooting myself in the foot by destroying part of the (valid) instructions at the location I wanted to go to, since the instructions and the location are pretty closely coupled.

But, we know that whatever we put in that special (previously) 0x2434 location gives us a portal to changing/overwriting the data at that location.

Having walked through the code step-by-step for an overflowed value, it seems like it’d be useful to walk through it with a non-overflowed value, to understand how free works under normal conditions.

If our username is AAAABBBBCCCCDDDD and our password is aaaabbbbccccdddd, then a pre-first-free looks like this, with the 0x2434 (“end of the second block”) still intact:

In the overflowed case, line 0x451a is where it gets interesting.  Previously, this put 0x4646 into r14, but now it’s just puts 0x2400 which is the beginning of this block of memory.

By the time both frees are over, that chunk of memory looks like this:

Which is to say that some of our metadata in the 0x2400 block got clobbered.

Bringing this back around to the overflowed case, free is using a pointer to the metadata to update (and “free”) that block of code.  if we’re able to overwrite that pointer, we can then change the values stored at a new location.  Finally, we will use that to reroute program execution back to input of our choosing, which will then be executed.

If you recall, UAF is where the “dangling” pointer (leftover after a free call) is used.

My strategy at this point is to:

So let’s get started on that.

Next, I need to add the new address that I’m trying to reroute the program to.  Since I originally did this pointing to the password location, this value is 0x2420.  Later, it will be 0x2410 (within the username block).

The password input is our instruction to call the unlock_door function, but adjusted for the math that happens (add 0x6, etc):

This blog post is already getting tediously long but I recommend that you provide this (hex-encoded) username input and step through the input function.

This will reroute the program to return to 0x2420 at the end of login, instead of 0x4440.  0x2420, which is part of our recently freed password block of memory, contains instructions (b012 4564) to call the unlock door function.

Of course, after completing this, I checked the rankings.  I saw that other people did it in 20 bytes, whereas I did it in 24 bytes.  I thought that they must have put their assembly instructions within the username, so I improved on my solution.

The b012 4564 assembly needs to go somewhere in the username block.  After we change that, we have to update our username input (the overflow portion) to account for this new location.  Then, we can input nothing for the password.

Part of the username gets clobbered by the “free metadata overwrite” part, so I just repeated the assembly instructions for most of the first 16 bytes:

Hopefully you understand the dangers of memory allocation a little bit better after this post.  Happy hacking!